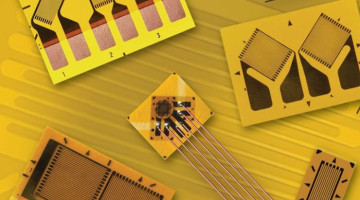 Strain gauge overview in the shop 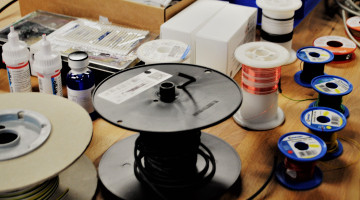 Here is an overview of all DMS-related articles.

Strain gauge accessories in the shop

The Wheatstone bridge circuit is the preferred circuit for measuring resistances. It can be used for the absolute determination of a resistor, or for determining a relative change in resistance. In the measurement with strain gauges, the relative change of resistance is measured.

Advantages of the bridge circuit

This is the most widely used circuit in the stress analysis.
The active strain gauge (1) is complemented by three passive resistors (2,3,4) for full bridge.

The measurement of the thermal expansion of a material is not possible due to the self-compensation of the strain gauge with a quarter bridge. Rather, for this purpose, a second strain gauge R2 of the same properties as R1 is glued to a material sample with the expansion coefficient 0 ppm/K (e.g. Titanium Silicate Glass) and exposed to the same temperature change as R1. It is then a half-bridge. The similar strain gauges are glued to two different materials.

To improve temperature compensation, a second strain gauge R2 is glued to a similar material sample in the stress analysis (with the same thermal expansion as the component to be examined). Both strain gauge R1 and R2 must experience the same temperature change (i.e. installed in the same location). The material sample with R2 (e.g. a steel sheet 25mm x 25mm x 4mm) is elastically (e.g. with silicone) attached to the component.

The nonlinearity of the quarter bridge is negligible for small strains in the range up to 1000 microns/m.

Rule of thumb: At 1000 microns/m elongation ("at 1 per mille elongation") the deviation of the real elongation from the elongation determined with the linearized bridge equation is about 1

In the (active) half bridge, the two active strain gauge (R1, R2) are supplemented by two passive resistors (R3, R4) to the full bridge. The strain of R1 and R2 must be equal in amount, but opposite sign. For example, R1 is glued to the top, R2 to the bottom of a bending beam.

This circuit is used in low-cost sensors. However, a full bridge can achieve the double output signal.

The full bridge with 4 active strain gauges in longitudinal strain is the preferred standard circuit in the sensor production.

It provides the best possible compensation of temperature influences and mechanical interference.

This circuit is used in the stress analysis and at low cost sensors.

In fact, this is not the case with cylindrical bodies: the circumferential elongation is twice as large as the longitudinal elongation. For the relative volume change, the following applies: ΔV/V = 2Δd/d + 1Δl/l due to V=pi d2/4 L

This circuit is rarely used.

The two co-rotating strain gauge (1.3) are supplemented by two transversely arranged strain gauge (2.4) for the full-bridge.
This circuit is, struts preferably used in tension.
For precision sensors linearization is often provided with additional semiconductor strain gauge.