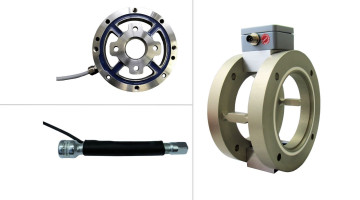 Torque sensors in our online shop

The unit for the moment (torque) is derived from the base units "force" and "path".

If the force acts on a rigid body with a fixed axis of rotation, then this body is not displaced, but set in a rotational movement.
In this case it is not only the amount of force, but also the distance of the force application point to the rotation axis of importance: The greater the distance, the greater the effect of rotation (rotational acceleration).
The moment is defined by force times lever arm.

The influence of the rotational movement also occurs when a pair of forces effects a rigid body instead of a single force.

The pure rotational motion without displacement occurs when the both forces are opposit and equal in size.

This force pair is always available at one moment (torque): for a rotating body to which a force acts, the bearing reaction force forms the opposing force, which is exactly the same size, but acts at a certain lever distance.
Therefore one could say: a moment is a force couple.

In the technics it is distinguished between:

If the force couple (moment) does not trigger rotational movement, then it is not torque but moment. Depending on the type of mechanical load it is technically distinguished between:

The unit newton meter for the moment (torque) is derived from the Si units for force (Newton) and length (meters).