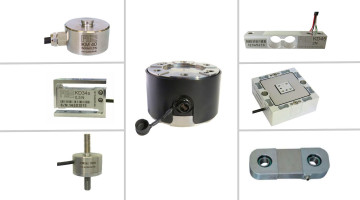 Force sensors in our online shop

The unit of mass is the kilogram. The kilogram is one of seven base units of the SI unit system. All other units are derived from the base units.
1 kg is equal to the mass of the international kilogram prototype in Paris.

The Anglo-American units gram-force [gf], kilogram-force [kgf], ton-force [tf], pound-force [lbf] and kilo pounds of force [kip] correspond to the forces acting on a body of the respective mass as "gravitational force"  in the gravitational field of the earth.

The weight FG is proportional to the mass m. The proportionality factor g is the gravitational acceleration and is 9.80665 m/s² on Earth: FG = m · g

The kilopond was one of the three basic units of the technical unit system. The technical system of units has been banned since 1977th. The kilopond and pond corresponded to the weight forces of a kilogram or gram in the gravitational field of the earth.
The spelling for the weight of one kilogram is therefore
1 kg · 9.80665 m/s² oder 9.80665 N,
or in the Anglo-American environment continue to be simply 1 kgf.

A poundal is the force, which accelerates 1 pound with 1 feet/s ².